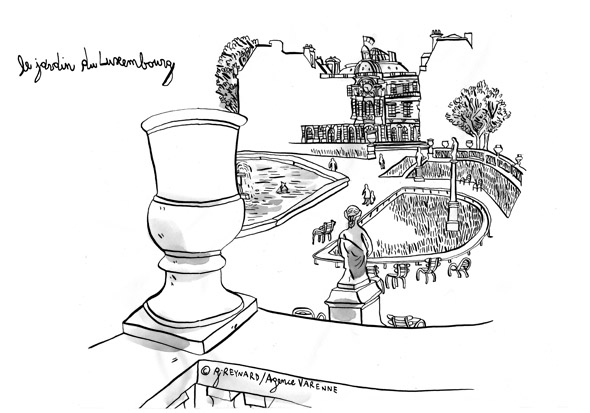 Luxembourg is a world unto itself. From the park Marie de Medici ordered to embellish her palace to the present gardens, a lot has changed. But what remains is pure magic. Incomparable magic created by the greenery, freshness and beauty offered by these twenty-three hectares in the heart of the left bank.

Affectionately known to Parisians as "Luco", it is marvellous whatever the season. Living nearby is a great privilege - the balconies on rue Guynemer and rue Medici offer one of the most enchanting viewpoints in Paris. Understandably some city dwellers even limit themselves to the Luxembourg gardens. Because whatever the time of day, they will find something to do. An exhibition at the museum – one of the best in the capital; a game of chess under the arbours; lunch in the garden restaurant; candyfloss or an ice lolly from one of the pretty little kiosks; a detour to the hives, where the beekeepers give classes every day; a nod to all those illustrious figures who are the pride of the garden: Verlaine, Delacroix, and even the statue of Liberty signed Bartholdy, whose big sister adorns the New York harbour... And then there is the hidden Luxembourg, the one everyone wants to explore: the gold of the Sénat building, watching over the garden (and guaranteeing its unique security); the subterranean passages which run under the flowerbeds and join the famous catacombs on the left bank; the orchard, a veritable apple and pear conservatory, which adorn the cupolas on the Elysée and the Sénat. And finally, the pleasure of lying out on the south side of the Orangerie to soak up the sun.

Luxembourg? A special form of happiness.

If there were a dream place for having children, this would be it. Ponds with miniature boats everywhere; the swings to make the little ones laugh; the marvellous Punch and Judy show, presented by the same family since the 1930s; the swarming playground, which will enchant the children for days on end; the cleverly disseminated little sandpits; and of course, the ponies, who arrive in the morning and leave in the evening having walked the children like miniature musketeers...

It would be difficult to find anything more romantic (and stranger) than the Fontaine Medicis, which slumbers in the shadow of the Sénat. With a fascinating illusion created by the perspective, it seems as if the water is on a slope. How many lovers have met for their first date there?